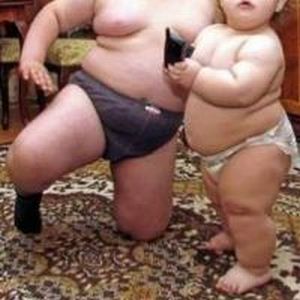 Can you sleep away pounds? Well, not exactly, but research has shown that people who sleep a good eight hours-plus are more likely to maintain a normal weight than those who sleep less than eight hours a night. Now, a new study finds that even for infants and preschoolers, a good, long night’s sleep may be just as important as diet and physical activity.

Over the past three decades, obesity rates have doubled among children age 2 to 5, and tripled among 6- to 11-year-olds. So University of Washington maternal and child health researcher Janice Bell wanted to know whether sleep had anything to do with it.

She looked at federal data collected on nearly 2,000 children and compared those who slept 10 hours or more a night with those who slept less. She also looked at how much the children weighed over a five-year period. The most striking findings had to do with infants and toddlers. The study appears in the Archives of Pediatrics and Adolescent Medicine.

“They were nearly twice as likely to move from normal weight to overweight, or overweight to obese in that five-year period,” she says.

Can’t Catch Up With Naps

This is also an important message to parents, Bell says, to encourage them to help their children get on routine schedules of a long and solid night’s sleep. Especially, she says, because it turned out that napping during the day did not reduce the risk that these kids would gain weight.

Psychiatrist Emmanuel Mignot, who directs the Center for Sleep Sciences at Stanford University School of Medicine, suggests that one reason naps may not work is because daytime sleep is qualitatively different than nighttime sleep. Mignot says that sleeping at night is deeper and therefore more restorative than sleeping during the day. It makes sense, he says, that one can’t “make up” for lost sleep by dozing during the day or even having scheduled naps as toddlers often do.

Bell’s study didn’t examine the reasons why children who sleep less have an increased risk of gaining weight within just a few years, but she does have some theories.

“It may be that children who don’t sleep enough at night are too tired to engage in the kind of physical activity that may prevent obesity,” Bell says. She adds that another reason may be the result of the relationships between hormones that control appetite and sleep.

Mignot says that studies done in his sleep lab found that if you sleep less, certain hormones like leptin and ghrelin change in a way that stimulates appetite. Leptin, which is a starvation signal, decreases and gives you the feeling that you should eat more. At the same time, levels of ghrelin, which stimulate the appetite, increase.

It’s an unfortunate combination adding up to an increased risk of weight gain. Mignot’s studies were done in adults, but he says a similar hormonal shift likely takes place in children as well. This hormonal shift also increases cravings for unhealthy foods like those high in salt, sugar and fat.

On average, Mignot says children up to age 5 need at least 10 hours of sleep a night. Infants and young toddlers, of course, need even more.

Seasonal oscillation of influenza is prominent, its epidemic is explosive, and it ends abruptly. To explain this peculiar pattern, Cannell et al (1) hypothesized that the seasonal oscillation of serum vitamin D concentrations, which was recently discovered to up-regulate innate immunity, may affect the epidemic pattern of influenza. Vitamin D is mostly obtained from sun exposure; thus, serum vitamin D concentrations can be affected by season. In fact, serum concentrations of vitamin D have been shown to decrease in winter, the season when influenza occurs, to concentrations half those during the summer (1). In a post hoc analysis of side effect questions asked during a randomized controlled trial performed to determine whether vitamin D could prevent osteoporosis (2), cold and flu symptoms were reported 3 times less often in the vitamin D group than in the placebo group (3). However, although the authors conducted an additional randomized trial in 162 healthy adults, they could not reconfirm the benefit of vitamin D supplementation for the prevention of symptomatic upper respiratory tract infections (4). On the other hand, a significant inverse association between serum vitamin D intake and recent upper respiratory tract infections was seen in the third National Health and Nutrition Examination Survey (5). However, no rigorously designed clinical trials have evaluated the relation between vitamin D and physician-diagnosed influenza or delineated the necessary changes to prepare for an influenza pandemic (6). We conducted a randomized, double-blind, placebo-controlled trial comparing vitamin D3 supplements with placebo in schoolchildren to elucidate whether preventive intake of vitamin D supplements during winter and early spring seasons can reduce the incidence of seasonal influenza A.

In this randomized clinical trial, daily supplementation with 1200 IU vitamin D3 in school children between December and March showed a significant preventive effect against influenza A, although no significant difference was observed for influenza B. A 10-d course of postexposure prophylaxis with zanamivir or oseltamivir resulted in only an 8% decrease in the incidence of symptomatic influenza in children (7). In contrast, daily dietary probiotic supplementation was a safe effective way to reduce fever and other symptoms in small children (8). Moreover, a significant preventive effect of a product containing echinacea, propolis, and vitamin C on the incidence of respiratory tract infections was observed in children (9).

Randomized trial of vitamin D supplementation to prevent seasonal influenza A in schoolchildren1,2,3

Larger waist size, rather than traditional factors such as obesity, is the major reason why the United States has a higher diabetes rate than England, researchers say.

The new findings offer more evidence that excess fat around the mid-section is a health risk and suggest that studies of type 2 diabetes should focus on waist size along with traditional risk factors, said the American and British researchers.

In addition, women in America were much more likely than women in England to face a higher risk of diabetes because of their waist size (69 percent versus 56 percent), while American men had only a slightly higher waist size-related diabetes risk than their counterparts in England, the study authors found.

“Americans carry more fat around their middle sections than the English, and that was the single factor that explained most of the higher rates of diabetes seen in the United States, especially among American women. Waist size is the missing new risk factor we should be studying,” study co-author James P. Smith, corporate chair of economics at the RAND Corp., said in the news release.

The study findings were published online Oct. 7 in the Journal of Epidemiology and Community Health.

Smoking during pregnancy can increase the likelihood of a miscarriage, Sudden Infant Death Syndrome (SIDS), certain birth defects like a cleft lip or palate and premature birth, the Centers for Disease Control and Prevention warns.

New research is adding “conduct disorders” to that list of health risks. Mothers who smoked during pregnancy were more likely to have children who had behavioral issues, a new study found.

The CDC estimates that 13 percent of women smoked during their last three months of pregnancy. A 2012 survey conducted by the Substance Abuse and Mental Health Services Administration (SAMHSA) showed that an even higher amount, 21.8 percent of white women aged 15 to 44, smoked while pregnant. Black and Hispanic women’s rates lingered around 14.2 and 6.5 percent respectively.

Smoking has already been linked to increased risk of mental health problems for children. A 2011 Pediatrics study found children who had behavioral problems — including learning disabilities, attention deficit hyperactivity disorder (ADHD) and other behavioral and conduct disorders — were more likely to be exposed to secondhand smoke while they were growing up. In addition, kids who had a smoker in the home had a 50 percent increase in having two or three neurobehavioral disorders. However, it was unclear in the Pediatrics study if the moms had smoked through their pregnancy.

For the new research, doctors looked at three studies — the Christchurch Health and Development Study (a long-running study that includes biological and adopted children), the Early Growth and Development Study (an adoption-at-birth study), and the Cardiff IVF Study (an adoption-at-conception study among genetically-related families and genetically-unrelated families) — for data.

The adopted children were included in order to examine the role of genetics versus environment and different parenting styles.

Researchers asked the mothers whether they had smoked cigarettes during pregnancy and how many they smoked per day. They also asked parents and teachers to report any behavioral problems the child exhibited between the ages of four and 10. They then scored the behavior of each child, with 100 being average and a higher number indicating more behavioral problems. Children who were born to biological mothers who did not smoke scored a 99 on average. Children born to biological mothers who smoked 10 or more cigarettes a day scored a 104 on average.

When researchers looked at the data from birth mothers of adoptive children, they saw similar problem patterns in kids whose genetic mothers smoked while pregnant. The same behavioral issues were seen even for mothers who got a donor egg through in vitro fertilization (IVF) and were not genetically-related to the children they gave birth to.

“It’s illuminating the prenatal period as having an ongoing influence on outcomes,” Harold said.

Theodore Slotkin, a professor of pharmacology and cancer biology at the Duke University School of Medicine in Durham, North Carolina, added in anaccompanying editorial published in the same issue that the study just adds more evidence that smoking during pregnancy can only harm the fetus.

“Thus, the conclusion is incontrovertible: Prenatal tobacco smoke exposure contributes significantly to subsequent conduct disorder in the offspring,” he wrote. “Considering the relationship of conduct problems to poor school performance, social isolation, and juvenile and adult incarceration, the negative impact on the affected individuals’ quality of life and, ultimately, on society as whole, cannot be underestimated.”

The study was published in JAMA Psychiatry on July 24.

Children are more likely to suffer severe asthma if their mothers are stressed, study finds

Angry and irritated mothers or those who try to suppress their emotions can worsen the condition in their offspring, particularly when the children are young.

A year-long study of 223 mothers, investigated what effect their stress levels, coping styles and parenting styles had on their two to 12 year old children who suffered from asthma.

Mothers’ tendencies to reject, dominate, overprotect and indulge their children were assessed by questionnaire, as were their specific kinds of chronic stress and coping styles.

Children over the age of seven suffered worse attacks if their mother was over protective.

But younger children suffered more in the following year if their mother was chronically angry, irritated or suppressed their emotions.

Jun Nagano, of the Kyushu University Institute of Health Science in Japan, said that stressed mothers made children more stressed which increased their suffering from asthma.

He said: “Our results suggest that the mothers of younger children may be advised to pay more attention to the reduction of their own stress.

“Mothers of older children may be encouraged to increase their own wellbeing via proper egocentric and self-defensive activities, being careful to avoid too much interference with their children.”