The American Academy of Pediatrics (AAP) Committee on Nutrition published a statement in 2006 regarding lactose intolerance in infants, children and adolescents.  Please pay attention to this article since many schools only sell milk to students at lunch and do not offer any alternative beverages such as water or juice. The reason schools have implemented this milk-only policy is to receive a greater amount of federal money.  The more milk a particular school sells then the more money they receive in federal aid.  Basically this is a cozy relationship between the milk industry, the government and schools and may not be in the best interest of your child.

According to this AAP report, 70% of the world’s population has primary lactase deficiency. The percentage varies according to ethnicity and is related to the use of dairy products in the diet, resulting in genetic selection of individuals with the ability to digest lactose. In populations with a predominance of dairy foods in the diet, particularly northern European people, as few as 2% of the population has primary lactase deficiency. In contrast, the prevalence of primary lactase deficiency is 50% to 80% in southern Europeans and Hispanic people, 60% to 80% in black and Ashkenazi Jewish people, and almost 100% in Asian and American Indian people. The age of onset and its prevalence differ among various populations. Approximately 20% of Hispanic, Asian, and black children younger than 5 years of age have evidence of lactase deficiency and lactose malabsorption, whereas white children typically do not develop symptoms of lactose intolerance until after 4 or 5 years of age.

I am certain that the demographics of the student body at any school includes more than children of northern European descent.  This means that the great majority of students are lactose intolerant and are offered only milk to drink. Having such a school policy in effect may result in “significant discomfort, disrupted quality of life, and loss of school attendance, leisure and sports activities, and work time, all at a cost to individuals, families, and society” per the AAP statement.  Make sure your school does not have this disastrous policy in place.  There are plenty of dietary alternatives to obtain the needed calcium and without the lactose, namely almond milk and coconut milk.

Rules For The School Bus

1. Getting on the school bus.
– When waiting for the bus, stay away from traffic and avoid roughhousing or other behavior that can lead to carelessness. Do not stray onto streets or private property.
– Line up away from the street or road as the school bus approaches.
– Wait until the bus has stopped and the door opens before stepping onto the road.
– Use the hand rail when stepping onto the bus.

2. Behavior on the bus.
– Find a seat and sit down. Loud talking or other noise can distract the bus driver.
– Never put head, arms or hands out of the window.
– Keep aisles clear as books or bags are tripping hazards.
– Get ready to leave the bus before you reach your stop.
– At your stop, wait for the bus to stop completely before getting up from your seat.

3. Getting off the school bus.
– If you have to cross the street in front of the bus, walk at least ten feet ahead of the bus along the side of the road, until you can turn around and see the driver. Make sure that the driver can see you. Wait for a signal from the driver before beginning to cross.
– When the driver signals, walk across the road, keeping an eye out for sudden traffic changes.
– Stay away from the bus’ rear wheels at all times.

4. Correct way to cross the street.
– Children should always stop at the curb or the edge of the road and look left, then right, and then left again before crossing.  They should continue looking in this manner until they are safely across.
– If students’ vision is blocked by a parked car or other obstacle, they should move out to where drivers can see them and they can see other vehicles — then stop, and look left-right-left again.

1. Be enthusiastic about the upcoming change. If you are excited and confident, your child will be too.
2. Prepare yourself. Take note of how your child reacts to separation. If possible, visit the new setting with your child. Introduce your child to the new teacher or early childhood professional in advance.
3. Arrange a playdate with another child from the program, preferably one-on-one, so that your child will see a familiar face when they walk in.
4. Start daily routines that will add to continuity. Let your child become involved with packing lunch or laying out clothes. Also, begin an earlier bedtime several weeks before.
5. Put aside extra time, particularly on the first day, for chatting and commuting together. But remember not to prolong the good-bye. If the child whines or clings, staying will only make it harder.
6. Always say good-bye to your child. Be firm, but friendly about separating. Never ridicule a child for crying. Instead, make supportive statements like, “it’s hard to say good-bye.”
7. At the end of the work day, put aside your concerns and focus on being a parent.

Use this checklist from the Consumer Products Safety Commission (CPSC) to find out whether the playgrounds and play structures your child uses are up to par. Be sure to consider your neighborhood public playgrounds, your own play equipment or your neighbor’s and your preschool and school playgrounds.

1. Make sure surfaces around playground equipment have at least 12 inches of wood chips, mulch, sand, or pea gravel, or are mats made of safety-tested rubber or rubber-like materials.
2. Check that protective surfacing extends at least 6 feet in all directions from play equipment. For swings, be sure surfacing extends, in back and front, twice the height of the suspending bar.
3. Make sure play structures more than 30 inches high are spaced at least 9 feet apart.
4. Check for dangerous hardware, like open “S” hooks or protruding bolt ends.
5. Make sure spaces that could trap children, such as openings in guardrails or between ladder rungs, measure less than 3.5 inches or more than 9 inches.
6. Check for sharp points or edges in equipment.
7. Look out for tripping hazards, like exposed concrete footings, tree stumps, and rocks.
8. Make sure elevated surfaces, like platforms and ramps, have guardrails to prevent falls.
9. Check playgrounds regularly to see that equipment and surfacing are in good condition.
10. Carefully supervise children on playgrounds to make sure they’re safe. 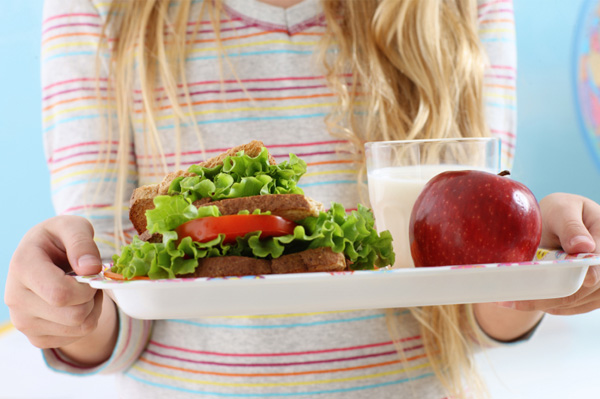 1. Use the Nutrition Facts label to help choose healthy foods.  Select those lower in fat, sugar and sodium.
2. Limit cheese on sandwiches and choose low-fat or fat-free varieties.
3. Choose lean meats.
4. Include at least one serving of fruit.
5. Use vegetables creatively. Garnish sandwiches with spinach, sprouts, grated carrots and tomatoes. Cut peppers or cucumbers into bite-size pieces for dipping into low-fat dressing.
6. Make sandwiches with whole grain bread rather than white bread.
7. Limit snack foods and baked goods as they may be high in fats, sugars and salt.  Unbuttered popcorn and pretzels are healthy alternatives.
8. Choose 1% or fat-free milk.
9. Select 100% juice and not juice drinks.
10. Have the children help make their lunch so they learn proper food choices and they “buy-in.”

Use school lunches as a chance to steer your child toward good choices. You can’t force a child, but you can make it easier to eat healthy. Especially with younger kids, start by explaining how a nutritious lunch will give them the energy to finish the rest of the school day and enjoy after-school activities. Here are some other steps to take:

1. Look over the cafeteria menu with your child. Ask what a typical lunch includes and which meals he or she particularly likes.
2. Recommend items that are healthier, but be willing to allow your child to buy favorite lunch items occasionally, even if that includes a hot dog.