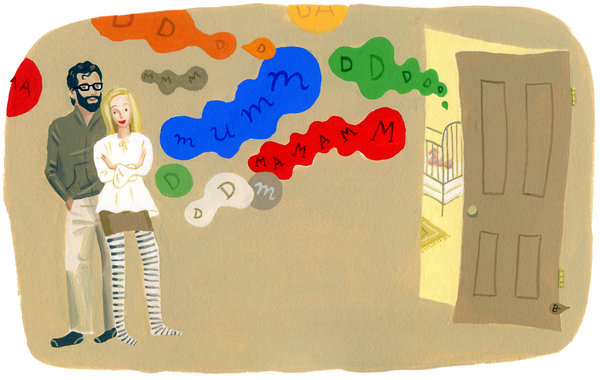 As a pediatrician, I always ask about babble. “Is the baby making sounds?” I ask the parent of a 4-month-old, a 6-month-old, a 9-month-old. The answer is rarely no. But if it is, it’s important to try to find out what’s going on.

If a baby isn’t babbling normally, something may be interrupting what should be a critical chain: not enough words being said to the baby, a problem preventing the baby from hearing what’s said, or from processing those words. Something wrong in the home, in the hearing or perhaps in the brain.

Babble is increasingly being understood as an essential precursor to speech, and as a key predictor of both cognitive and social emotional development. And research is teasing apart the phonetic components of babble, along with the interplay of neurologic, cognitive and social factors.

The first thing to know about babble is also the first thing scientists noticed: babies all over the world babble in similar ways. During the second year of life, toddlers shape their sounds into the words of their native tongues.

The word “babble” is both significant and representative — repetitive syllables, playing around with the same all-important consonants. (Indeed, the word seems to be derived not from the biblical Tower of Babel, as folk wisdom has it, but from the “ba ba” sound babies make.)

Some of the most exciting new research, according to D. Kimbrough Oller, a professor ofaudiology and speech-language pathology at the University of Memphis, analyzes the sounds that babies make in the first half-year of life, when they are “squealing and growling and producing gooing sounds.” These sounds are foundations of later language, he said, and they figure in all kinds of social interactions and play between parents and babies — but they do not involve formed syllables, or anything that yet sounds like words.

“By the time you get past 6 months of age, babies begin to produce canonical babbling, well-formed syllables,” Professor Oller said. “Parents don’t treat those earlier sounds as words; when canonical syllables begin to appear, parents recognize the syllables as negotiable.” That is, when the baby says something like “ba ba ba,” the parent may see it as an attempt to name something and may propose a word in response.

Most of the time, I ask parents: “Does he make noise? Does she sound like she’s talking?” And most of the time, parents nod and smile, acknowledging the baby voices that have become part of the family conversation.

But the new research suggests a more detailed line of questions: by 7 months or so, have the sounds developed into that canonical babble, including both vowels and consonants? Babies who go on vocalizing without many consonants, making only aaa and ooo sounds, are not practicing the sounds that will lead to word formation, not getting the mouth muscle practice necessary for understandable language to emerge.

“A baby hears all these things and is able to differentiate them before the baby can produce them,” said Carol Stoel-Gammon, an emeritus professor of speech and hearing sciences at the University of Washington. “To make an m, you have to close your mouth and the air has to come out your nose. It’s not in your brain somewhere — you have to learn it.”

The consonants in babble mean the baby is practicing, shaping different sounds by learning to maneuver the mouth and tongue, and listening to the results. “They get there by 12 months,” Professor Stoel-Gammon continued, “and to me the reason they get there is because they have become aware of the oral motor movements that differentiate between a b and an m.”

Babies have to hear real language from real people to learn these skills. Television doesn’t do it, and neither do educational videos: recent research suggests that this learning is in part shaped by the quality and context of adult response.

To study babbling, researchers have begun to look at the social response — at the baby and the parent together. Michael H. Goldstein, an assistant professor of psychology at Cornell, has done experiments showing that babies learn better from parental stimulation — acquiring new sounds and new sound patterns, for example — if parents provide that stimulation specifically in response to the baby’s babble.

“In that moment of babbling, babies seem to be primed to take in more information,” he said. “It’s about creating a social interaction where now you can learn new things.”

A study this year by this group looked at how babies learn the names of new objects. Again, offering the new vocabulary words specifically in response to the babies’ own vocalizations meant the babies learned the names better.

The experimenters argue that a baby’s vocalizations signal a state of focused attention, a readiness to learn language. When parents respond to babble by naming the object at hand, the argument goes, children are more likely to learn words. So if a baby looks at an apple and says, “Ba ba!” it’s better to respond by naming the apple than by guessing, for example, “Do you want your bottle?”

“We think that babies tend to emit babbles when they’re in a state where they’re ready to learn new information, they’re aroused, they’re interested,” Professor Goldstein said. “When babies are interested in something, they tend to do a furrowed brow,” he continued; parents should understand that babble may be “an acoustic version of furrowing one’s brow.”

Right there, in the exam room, I have that essential experimental combination, the baby and the parent. It’s an opportunity to check up on the baby’s progress in forming sounds, but also an opportunity to help parents respond to the baby’s interest in learning how to name the world — a universal human impulse expressed in the canonical syllables of a universal human soundtrack.