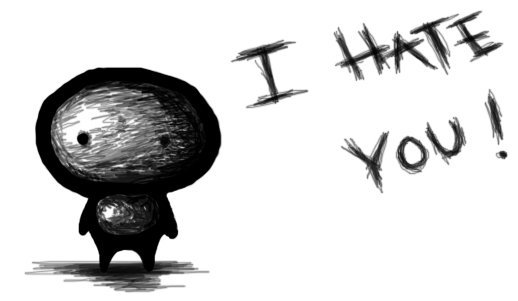 You know you’re going to get some fussing and complaining when you tell your kid to turn off the TV or video games, but then one day she lets loose with “I hate you!” Whoa! Why has your sweet child suddenly turned on you–and what should you do to get her to stop the mean language?

“Don’t take it personally,” says Sal Severe, Ph.D., author of How to Behave So Your Children Will, Too! Kids use inflammatory language like this when they’re geniunely upset but don’t have the tools to express themselves precisely. “Your six-year-old isn’t able to say ‘I feel frustrated and angry because you won’t let me watch my television program.'” To put it simply, she wants you to know she’s mad. Severe’s advice: Acknowledge her anger calmly, but stand your ground. “Say ‘I’m sorry you hate me, because I love you very much.’ Then add, ‘It’s okay that you’re angry, but you still have to turn off the TV.'” You can mention that everyone gets upset occasionally, but it’s not all right to take it out on someone else.

If your child declares she hates you when you discipline her, don’t up the ante: “You’re teaching her that she can push your buttons, and this gives her too much emotional control,” Severe says. You want to remain calm to show her that you’re the one in complete command of the situation. Also resist the urge to tell her in the middle of a screaming fit that she doesn’t really mean “hate”–this will demonstrate that her word choice has power and she’ll use it again and again. Later, when things have settled down, you might explain that “I’m angry” or “I’m disappointed” are better alternatives.