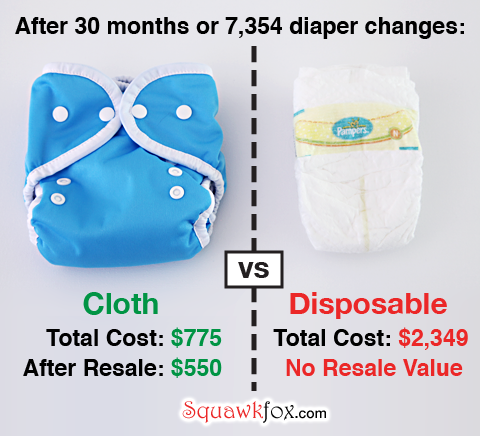 by Stephanie of “Mama and Baby Love”

I got Penelope’s size large cloth diapers this week and I thought I would take a moment to explain why we cloth diaper in the first place.

Surprisingly, cloth diapering has actually been a very pleasant experience. I thought it was going to be much more work. It is more laundry, but other than that, its pretty convenient. I do a load of diapers about every two days. About once a month, I hang the stained diapers outside on a clothes line to dry and it magically gets all the stains out. I have about twenty diapers in my stash. I do a dry pail system where I just throw the dirty diaper into a trashcan with a pail liner. When its time to wash them, I put everything in the wash, liner included and do one rinse cycle on cold and then a wash cycle with detergent on hot. I have to do two cycles in the dryer to fully dry them. We use a diaper called Dream Eze by the Natural Baby Company and they are a type of diaper that are called an All In One or an AIO. That means I don’t have to stuff any additional inserts to use the diaper. These types of diapers are most like disposables in that way, but they are also some of the more expensive cloth diapers on the market. I just put them on, snap her up and Penelope is ready to go. Even Peter is a pro at putting them on her. I used a Pocket diaper when she was a newborn, until she was about three months old. It was a diaper called Pocket Change by the same company, but they don’t make them anymore. I really liked those diapers, even though I had to spend extra time stuffing the inserts, because they were so trim. But I have really grown to love the Dream Eze diapers, and even though they are a bit bulkier than the Pocket Change, it’s not that bad, the only thing that she has a hard time fitting into are jeans. The company has discontinued the Dream Eze style as well, but has come out with a similar style and it’s a one size fits all. That means you have snaps in the front and the diaper ‘grows’ as your baby grows. The concept seems great, especially considering you save lots of money by buying only one size diaper. But I am glad I have three different sizes. I hate big bulky cloth diapers and the one size diapers seem like they would be pretty bulky, especially on a newborn, but I don’t speak from experience. I also use cloth wipes and make my own wipe spray, which is a piece of cake to make. I spray the solution on a cloth wipe and wipe her like normal. We bought all our diapers locally from a business called Ecological Babies. The owner, Jen, was super helpful and helped me picked out the diaper that was right for me. I never once felt overwhelmed.

Ok, so back to what I was originally wanting to write about: why we cloth diaper. My biggest reason is not because of the environment or to save money, I am most concerned about what touches my daughter’s skin. I have done no real research at all, but to me, the chemicals that a disposable diaper has in them to make them so absorbent just can’t be any good. Now, those chemicals may or may not give her cervical cancer or exzema, but they sure aren’t doing any good to her skin, so I want to avoid it. I like knowing that what is touching her skin all day and all night is organic cotton. Makes me sleep better. Well, not really, since Penelope gets up every hour but you know what I mean. And she has never had a diaper rash in her life and that is always great.
The next biggest reason we cloth diaper is for the environment. We are greatly reducing our carbon footprint by choosing to cloth diaper. Even when you calculate in the washing and drying of the diapers (this is not the case if you use a diaper service). I saw a great article the other day that said it takes nearly 3.5 billion gallons of oil to produce the 18 billion throwaway diapers that Americans toss each year. To put that in perspective, that’s more than the amount of crude we import annually from Kuwait. The article went on to say that it takes 2/3 cup of petroleum to make just one disposable diaper. Pretty nutty, huh? To that, I say NO Thank You, this is not OK and I will not participate in that much petroleum consumption.

The third reason we cloth diaper is to save money. Now, we have already spent almost a grand on about 64 diapers, two pail liners, 36 cloth wipes and a shower sprayer that connects to our toilet (this is for later when her poo is solid and I have to dump it in the toilet before putting it in the pail). So we are not seeing any savings this first year, as that is about the amount that we would have spent on disposables her first year, but next year we will see some ROI. And when we use all the same diapers again for baby number two, that’s when the savings will really add up!

I will use a disposable here and there, I am not a Nazi about it. If all my diapers are in the wash, on goes a disposable. If I am running a bunch of errands, then I will take one cloth diaper and a couple of disposables because the cloth diapers take up so much room in my diaper bag. I also never use cloth wipes when I am out, I don’t want to deal with the hassle of pre-soaking my wipes then forgetting about them and having a mold issue. The wipes and disposables that we do use in a pinch are from Seventh Generation have the least amount of chemicals possible.

Has anyone wanted to try cloth diapers but felt overwhelmed? The Natural Baby Company has recently come out with a really great product that has flushable liners that would be a great cloth diaper with training wheels.